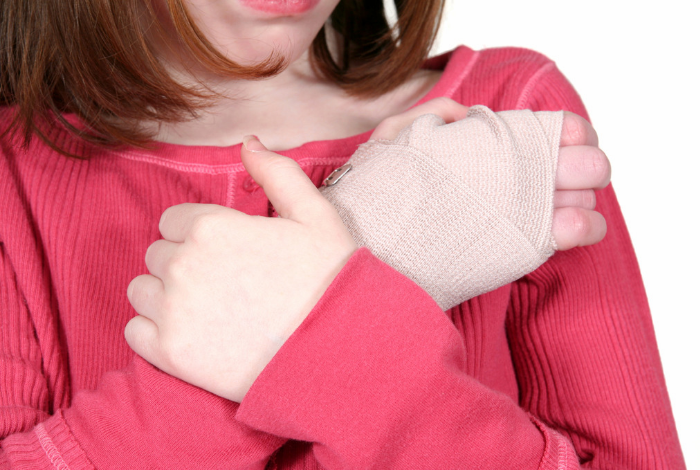 The risk of finger-trapping accidents occurring with doors that do not have covered hinges or door stoppers in place is always present – but the risk is much more heightened in educational settings like schools and daycare centers.

Young children are most at risk of finger-tripping accidents which can often result in fingers being severed, expensive medical bills for the child’s family, life-long damage and limitations and legal action taken against the daycare.

Finger-trapping accidents are easily prevented with the use of hinge guards and door stoppers and it is up to facility managers and directors to ensure that the right safety measures are in place to protect the children in your care.

An 11-year-old boy has been offered a settlement from his school district following a finger-trapping accident at Whitford Middle School. The sixth-grade student’s fingertip was severed by the double doors of the school’s gym during recess. The injury has left his family with Medicaid-related expenses of $7,500. The school district has offered to pay the sum of $65,000 to settle the case and avoid the possibility of a lawsuit.

The family of a 6-year-old boy is suing his school district after his pinkie finger was cut off by a closing door. The boy was standing in line in his classroom at Scribner Road Elementary School when the teacher closed the door with the boy’s little finger in the door frame – resulting in half the finger being cut off. Doctors were unable to re-attach the finger. The family’s lawyer said “When you send your kid to school, you don’t expect him to come home missing half a finger,”.

A 2-year-old boy lost his fingertip after his finger got caught in a closing door at his daycare. The incident occurred whilst a teacher was trying to prevent another child from entering the elevator alone. The boy’s parents were working in Manhattan at the time of the incident and were not informed of the severity of the incident by the daycare, suspecting a minor injury and asking the boys grandparents to pick him up. Whilst in the car, the paper towel covering the boys wound came off and the boy’s grandma saw the missing fingertip and exposed bone.

The boy was then rushed to White Plains Hospital – whilst the grandpa rushed back to the daycare to find the missing fingertip which daycare workers had put in a paper towel in the office. A hand surgeon was able to reattach the finger under general anaesthesia. Following the incident, the daycare’s license was suspended.

An image of the door where the accident occurred was obtained by CBS. There were no finger hinge guards in place. 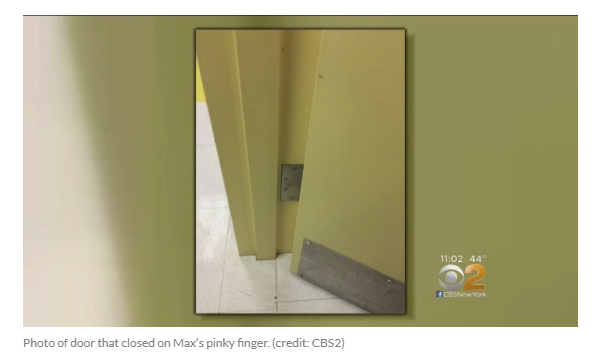 There has been many other reports of door finger trapping accidents occurring in schools and day care centers over the past few years with the accidents happening to children as young as 2-years-old and as old as 12-years-old.

Many schools and media outlets describe these incidents as ‘freak accidents’, however, reports show that 600,000 injuries resulting from fingers getting caught in doors occurred between 1999 and 2008 – leading to more than 67,000 amputations. An additional 580,000 injuries were caused by impact with a door or hinge.

With preventable finger-trapping accidents in educational environments still occurring in 2019, the importance of installing door finger guards on your door hinges is as relevant as ever.

Many child care centers and schools will state that their doors are always supervised at all times, therefore the chance of a door finger-trapping happening is not possible, however, this method of ‘safeguarding’ is hardly practical nor does it guarantee a finger-trapping accident won’t occur.